Posted at 14:35h in Public News by darkstar

In early March, and in preparation for Fix a Leak Week 2019, WHUD began a targeted outreach effort for customers who had been on the district’s higher than normal usage call list for several months in a row. While the district cannot actually fix the leaks, employees can help customers determine if they have one, review water usage data logs, and even point them in the right direction as to how to find the leak. So instead of just calling to inform the customers that usage was higher than normal, the automated alerts also offered to send a technician to the customer’s house to help troubleshoot the cause of the abnormal usage.

Throughout March, WHUD techs visited nearly a dozen homes and found half as many leaks – from leaking commodes to busted service lines. One of our favorite stories comes from a customer who has resided in WHUD’s service area for more than 20 years.

The customer, an elderly gentleman, had received several of the aforementioned higher than normal usage alerts and in early March called WHUD’s Customer Service Center for help. One of the district’s meter technicians responded to the service request and quickly confirmed that the meter was working properly and the customer did in fact have a leak. The tech talked to the customer and showed him how to test for a leak, at which time he shared with her that a plumber had been out to the house and installed a shut off valve at his house and at the top of an 80-foot bluff behind his house. Even with that, his service line still topped out at more than 2,500 feet of pipe. 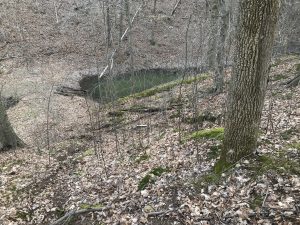 Because of this, and the fact that the customer could no longer navigate the rugged terrain, the meter tech reached out to the meter tech supervisor for a little extra support. A few days later, the pair returned to the home and walked the customer’s entire service line, which included two 150+ foot bluffs and a creek – terrain rugged enough that other hired professionals were hesitant to take the trek. About 20 feet from the bottom of the first bluff, they spotted a wet area and small puddles of water. They retreated up the hill a few feet and could see water flowing out of the ground. They’d found the leak.

Armed with information, the two headed back up to the customer’s house and reported the leak and its location to the customer. He thanked them and said that at his age, he would have never been able to climb down and back up the yard like they had.

Incidentally, while they were there, the meter supervisor spotted what looked like a leak on the neighboring property. He left a message with that customer and is still waiting to hear back.

There are many other stories just like this one, but they all carry the same important message for customers: pay attention to your usage. Often, a dramatic increase in usage is a sign that something has gone awry. Customers can quickly check for leaks by turning off all water to the home and taking a reading on their meter. For the newer meters with built in leak detectors, the numbers will still be moving. For older, tradiitonal meters, customers should wait at least 20 – 30 miinutes and take another reading. If the number has changed, there is a leak. For a step-by-step guide to test the meter and other leak detection tips, click here.